Sending soldiers love, one heartfelt card at a time

Heartillery Group’s mission is to show love and gratitude in simple ways to those who serve.

We work with schools, religious organizations, seniors, veteran’s organizations, corporations, businesses, and other caring communities to collect, assemble, and mail cards, letters and care packages to military personnel deployed across the globe.  Heartillery Group has sent nearly four million cards and 10,000 care packages to service personnel overseas since its inception in 2013.

Heartillery Group was created by Emily Spencer, whose husband Scott was deployed to Afghanistan three months after their wedding. What began as a simple family act of support and connection has blossomed into an ongoing global campaign with the goal of ensuring no service member feels alone or unappreciated. 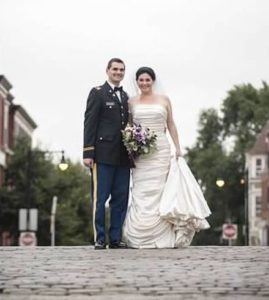 Emily Gordon and Scott Spencer were married Sept. 29, 2012 in Cambridge. They met while studying at Harvard.

Heartillery Group is a registered 501(c)(3) organization. Donations are tax deductible to the maximum extent allowed by law. Our Federal Tax ID number is 47-1692737.

YOUR GIFT IS VERY MUCH APPRECIATED AND MAY BE TAX DEDUCTIBLE PURSUANT TO IRC §170(C) AS A CHARITABLE CONTRIBUTION. A COPY OF HEARTILLERY GROUP’S [CORP. DOC. #N20000003177] LATEST FINANCIAL REPORT MAY BE OBTAINED BY WRITING TO HEARTILLERY GROUP, 830 A1A NORTH SUITE 13-189 PONTE VEDRA BEACH, FLORIDA 32082 | (904) 466-7864. A COPY OF THE OFFICIAL REGISTRATION AND FINANCIAL INFORMATION MAY BE OBTAINED FROM THE DIVISION OF CONSUMER SERVICES BY CALLING TOLL-FREE, 1-800-435-7352 (800-HELP-FLA) WITHIN THE STATE. REGISTRATION DOES NOT IMPLY ENDORSEMENT, APPROVAL, OR RECOMMENDATION BY THE STATE. FEDERAL TAX ID NUMBER 47-1692737.

The number of women and men currently serving according to the Defense Dept.